The New One Minute Manager is a slim volume—one that I imagine is much slimmer than its first, older edition [the #1 Bestseller on Managing Your Work and Life]—and not what I expected at all. The book’s authors are Ken Blanchard and Spencer Johnson, and both of them came together to write an awesome book.

Books, on the regular, perform their job of teaching the reader a thing or two. This book teaches you how to teach others in a comfortable and enjoyable way.

It’s awesome to me because I really find it a great skill of people to pack a lot of punch in their words—while using as little words as possible. The book, inclusive of acknowledgements and citation pages at the back, stands slim at 98 pages. Just under one hundred!

However, The New One Minute Manager should be awesome to you as well because it enables readers to look at the big picture of leadership—the book serves as a communication platform  between the ‘angels’ and ‘devils’ of leading: the ‘micromanagement’ and ‘completely apathetic’ leaders—and it invites readers to participate in the painting of this picture, because both Blanchard and Johnson’s tone throughout the book is instantly relatable and easy to comprehend.

This is the best! Key! Takeaway! that! I got! from New One Minute Manager!

Narrator [young man]: “Could you tell me more about the key parts of using a One Minute Re-Direct?

Jon Levy [character opposite the Narrator]: “Sure. He(the One Minute Manager) specifies exactly what went wrong so I know that he’s on top of things and that he doesn’t want me or my team to be known for poor or mediocre work.

Since he values the Re-Direct by reaffirming that he values me and my team, it’s easier for me not to react negatively and become defensive. I don’t try to rationalize away my mistake by fixing the blame on somebody else.

Of course, it helps to know that he will take responsibility if a goal isn’t fair to everyone. Because of that, I know he’s being fair.

The Re-Direct only takes about a minute, and when it’s over, it’s over. But you remember it, and since it ends in a supportive way, you want to get back on track.”

What is a Re-Direct?

According to Blanchard and Johnson, a Re-Direct takes One Minute. 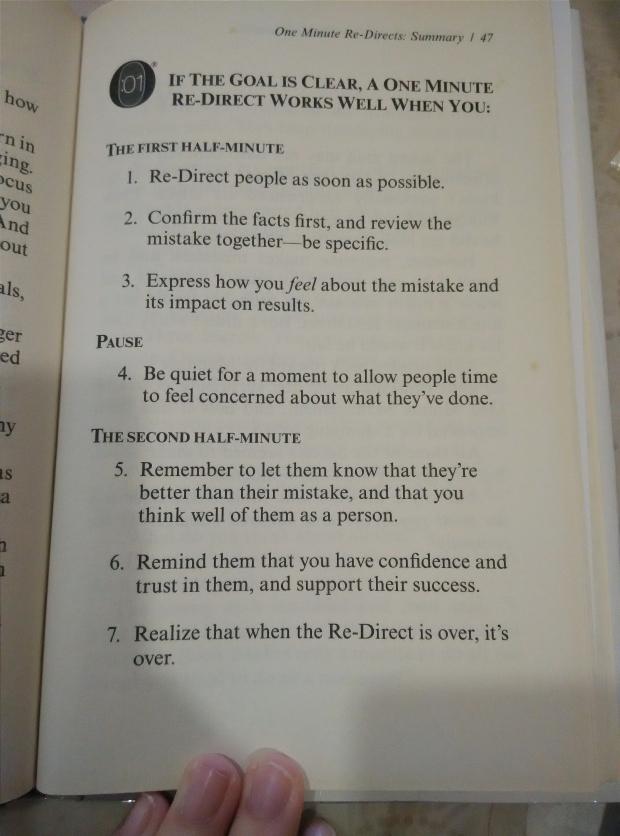 This is so, so important to me. 2016-2017 saw a year of tumultuous experiences careening into my life because of the leadership roles I took on, and double-living as Editor for Carpe Bloom, essentially complicated things. The Re-Direct is a principle—or a law, or a rule, or WHATEVER, basically—that I intend to follow through in future projects I lead or direct.

I’d also add that: Telling people of the impact of their mistake/little blip on the results also brings them INTO the picture, the end-painting that is a product of the good results. By telling them that what they’re doing is detrimental OR extremely essential to the end-result, aren’t we also showing to the person that they are a valuable contributor?

It IS in our innate human nature to enjoy being valued, whether it is at home, in our social circles, at school or in the workplace. If we value people the RIGHT way, while re-directing them, I feel that we would be able to become better leaders who have a solidly good intend of motivating and pursuing others on. At the very least, the intention would be perceived as such by the people we work with.

Wow. There are so many reasons why the second-half minute is a set of inexplicably amazing set of steps. I am someone who strongly believes that encouraging and empowering other people is able to reinforce a virtuous cycle of inspiring, as opposed to a vicious cycle that brings the morale of our community/organisation down.

Nowadays, people are quick to judge. We’re also quick to fling statements, allegations, accusatory statements. If someone makes a mistake in a certain community, the whole community might be divided in terms of deciding if the mistake was really a mistake, but one thing for sure is that there will be a large number of users who fight back. They will be hurling “educational” Tweets back or they will be dragging the person down in numerous posts.

However, the people on the receiving end might not only acknowledge their mistake—but, contrary to popular belief—they might also try their best to move on, or amend the mistake. Sure, we can preach that ‘first impressions last’ and constantly condemn someone who has made a mistake and had it recognised online before, but I do feel that we need to use the Re-Direct rule’s Second Half-Minute on occasion.

But people who actually try their best to move past their mistake—but are being held back by some of us who want to continue etching out the mistake in stone—deserve the second-half minute. At the very least, we need to remember that people do change and if they don’t—it’s not only their problem. It’s ours, as well. If they do not change, what happens is that they are able to spread the same mentality or problematic behaviour to those in their sphere of influence or to future audiences of their content. The things we will accuse people of and get angry or frustrated at will RISE in numbers, because nothing has changed. 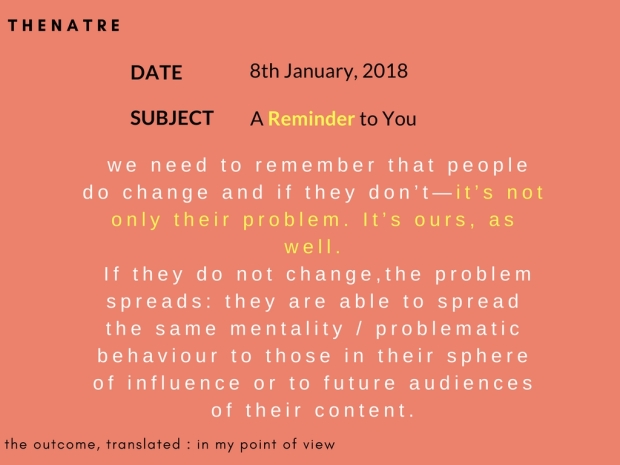 What we are able to do is help people effect a change. Once again, I iterate: This is not about forgiving certain individuals of crimes or of hate-speech or of ignoring the mistakes of people who have impacted communities or large demographics due to a clearly offensive crime.

This is about enabling each other to grow. It is difficult to categorise people—and we should never categorise people—but we can very loosely acknowledge that a certain group of people who had Tweeted a discriminatory Tweet years before, and now has demonstrated that they have learnt from it, are better people to work with when it comes to changing our community’s negative vibes to exuding more positive ones. People that have done offensive, outrageous things while being aware of the consequences, while begin aware of how large of an audience they can impact, are people who we can leave alone, and not try to re-direct.

Because after reading New One Minute Manager—which leaves such a quote:

We Are Not Just Our Behaviour.

We Are The Person Managing Our Behaviour. 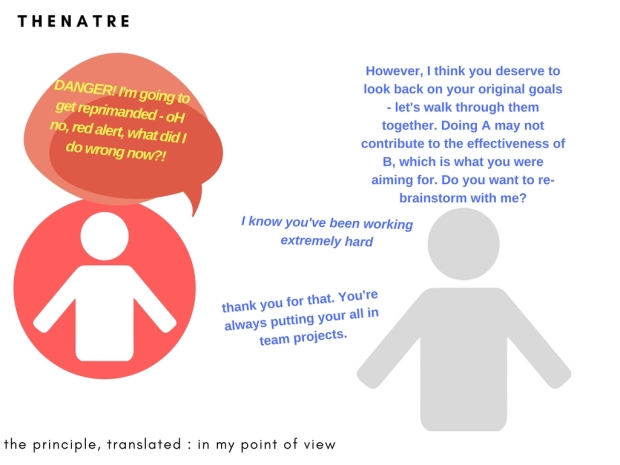 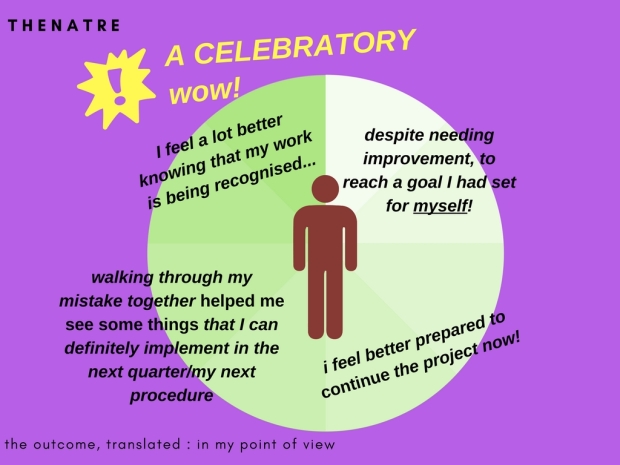 I think that it’s a really cool concept [The One Minute Re-Direct]. This book rewarded me, through its ninety-eight pages, by reaching out to the person inside of me who had been tentative and not brave enough to think about mistakes I had made quietly in certain areas. And now, the gift of Re-Direction will allow me to do what Blanchard and Johnson’s Narrator was told: Ultimately, GET BACK ON TRACK.

Featured Image | a Tree at Botanic Gardens, Singapore. Taken in 2015 by me. Relevance? A tree grows. Readers grow from a book. Learners grow from a principle, and a community grows from positive words and principle together.

Ken Blanchard and Spencer Johnson: You might also recognise them as the authors of Who Moved My Cheese – a bestselling book for five years. #Legends.