Last night, BTS became the first KPOP group to hit #1 on iTunes Overall, soaring up on the charts with their talented collaborators, Steve Aoki and Desiigner.

So, so, proud because I’ve been following BTS’ music, jaw-dropping, stunning live performances for two and a half years now—not that I’m counting—and they have honestly, true to goodness, come so far.

The fact that I loved Steve Aoki’s music ever since his cake-face compilation in 2015, and appreciated Desiigner’s fire bars since last year, makes MIC DROP REMIX one of the best things that has ever happened to me, as a fan. This collaboration was a DREAM collaboration and the music video, lyrics, word-play and the timing of the whole remix release was AMAZING.

I’ve titled this post ‘The Double Clutch‘. Why is the word ‘clutch’ here? No, it’s not because I like carrying clutches around—did you know that some clutches can only hold an iPhone X and nothing else—it’s because of the double meaning, that is so, so relevant to the lit remix that BTS put out.

BTS were at the American Music Awards on 19th November, 2017, and presented to artistes such as Demi Lovato, Diana Ross, their friends (since the BBMAs) The Chainsmokers, and adorable “fan boy” (more like star-studded actor), Ansel Elgort! Of course, because a lot of ARMYs were in attendance at the AMAs, the boys performed happily and to the sweet ‘music’ of loud, powerful fanchants. According to many Tweets, the American television channels actually muted the fanchants as they were above and beyond the volume and strength they had expected.

Over the past five days, I’ve seen reporters of American news-sites, online entertainment-focused blogs touting “Hollywood” in their titles, and countless verified Twitter handles take to the online platform to express their opinions on the performance—a majority of them along the lines of “Loved it”, “Blown away”. 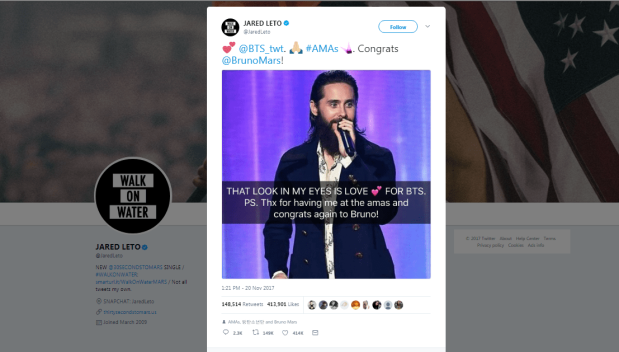 I watched the performance myself. I watched it many, many times. You can watch it here. You should watch it here, because it’s an HD video of their dynamic performance, which showcased the boys’ near-perfect live vocals, energetic raps (despite the mics being busted…sigh) and COMPLETE AND UTTERLY MINDBLOWING, FANTASTIC, HIGH-LEVEL, HARD-CORE CHOREOGRAPHY.

Boy, I was so proud. So proud that BTS showed to their star-studded audience and devoted fanbase worldwide that the hype that precluded their performance was deserving.

They came in clutch.

To come in clutch means to perform well under pressure. This is the Urban Dictionary definition. This is how the word ‘clutch’ becomes all-so relevant. BTS had been under a whole lotta pressure not only the day of their performance at the AMAs, but also for the past four days after their performance, with old and new fans all around the world eagerly anticipating the drop of their Mic Drop remix. The second teaser of the Mic Drop music video was actually played at the end of the AMAs—unbeknownst to some because it wasn’t televised—and that probably served its purpose in stirring interest amongst the flabbergasted audience at the AMAs, who exhibited positive reactions to BTS’ performance of DNA.

With all the hype and the anticipation that surrounded the release of the remix in both audio and video format, and for them to have delivered such a brilliant collaboration piece that shocked, like, all of my senses, I’d definitely say THEY CAME IN CLUTCH.

Furthermore, they got to #1 on iTunes overall. Their music video has11 million videos under less than 24 hours. Hello?! I’m so happy for all three talented household names in the music industry – BTS, Aoki and Desiigner. 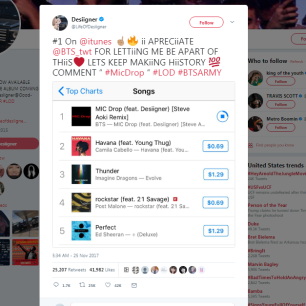 Here’s where I’m going to introduce the second meaning of ‘clutch’ and how it’s relevant to the Mic Drop Remix.

‘Clutch’ also means a small bag that you could easily hold in your hands. You can grasp it in one hand and if you pick one that complements the colour of your dress or brings out the shimmer in your shoes, then it looks extremely stylish. It’s small enough to allow your dress/outfit to be the main attraction, but can also be artfully designed such that it BECOMES the main point of attention.

The point is—it’s a bag.

In the original version of Mic Drop – check out this cool lyric MV here – the lyrics go,

Did you see my bag

Did you see my bag

My bag’s filled with trophies

In the remix version featuring Desiigner, the lyrics go,

BAGS. BAGS. THEY’RE TALKING ABOUT BAGS CARRYING THEIR TROPHIES, THEY’RE MOCKING HATERS WHO’VE TRIED TO SHUT THEM DOWN, THEY’RE NOT-SO-SUBTLY TELLING ANTIS TO LOOK AT THEIR DAMN GOOD TRACK RECORD, and that BTS’ success is going to continue, due to their hard work. Regardless of what haters say.

Well, this is my interpretation of the word ‘clutch’. No, it’s not a prose/poetry/prosery piece, but rather an article that I felt so glad writing, because of how far BTS has some, and how artfully they manage to shut down the people who’ve just been plain rude to them over the years.

P.S: Here’s a really lovely article regarding the ado about BTS – written by a blogger who’s writing has always inspired me to continue writing.

All of the interviews BTS did at the AMAs, right here! Thread was created by an amazing Twitter user; none of it belongs to me. Thank you for putting it up so we could all see the interviews!

Tamar Herman’s article regarding the release of the Mic Drop remix music video and audio with Steve Aoki and Desiigner. I usually turn to her Twitter page and columns for work that showcase a view in retrospect about musical history of artistes from different cultures. Her writing also updates and educates many readers on the diversity present in the music community!

Featured image from the MV, uploaded on BigHit’s main channel.